A HISTORY OF THE SALLAS HUMAN TRAFFICKING CASE

IN THE OPINION OF KEN DITKOWSKY

Amelia (Amy) and Dean Sallas (age 84) are an elderly Skokie couple who were targeted by predators who used the Circuit Court of Cook County, Illinois to isolate them and gain control of their substantial assets.The primary vehicle was case 07 P 5360 entitled IN RE AMELIA SALLAS.

The M.O. of the elder cleansing/human trafficking was routine.Amy was hauled before the Court, found to be so disabled as to need two guardians – one for her person and one for her property.Her husband of over 50 years was rejected in favor of strangers.The evidence presented was the usual one-sided clap trap.The standard of CLEAR AND CONVINCING EVIDENCE was obviated by the Court having the sole determination as to the quality and quantity of evidence.Any testimony presented would have satisfied this Judge.The Court made a mockery of…

The Justice Department concluded today, based upon a thorough investigation, that there is reasonable cause to believe that Alameda County is violating the Americans with Disabilities Act (ADA) in its provision of mental health services, and that conditions and practices at the county’s Santa Rita Jail violate the U.S. Constitution and the ADA.

The department’s investigation found that the county fails to provide services to qualified individuals with mental health disabilities in the most integrated setting appropriate to their needs. Instead, it unnecessarily institutionalizes them at John George Psychiatric Hospital and other facilities. In Olmstead v. L.C., the U.S. Supreme Court held that Title II of the ADA requires public entities to provide community-based services to persons with disabilities when appropriate services can reasonably be…

This couple has been unbelievably isolated from one another for over 18 months by the Office of Public Guardian.

There is no court order to do this. There is no reason to do this. He has never been investigated by APS or ever accused of a crime regarding his beloved wife.

Dean Sallas is about to be 84. He needs his wife.

This is the note he gets when he visits:

Dean Sallas
You may not visit Amelia Sallas until you have talke to Lisa Casanova and we have permission for visitations.   THIS IS A DIRECTIVDE FROM… 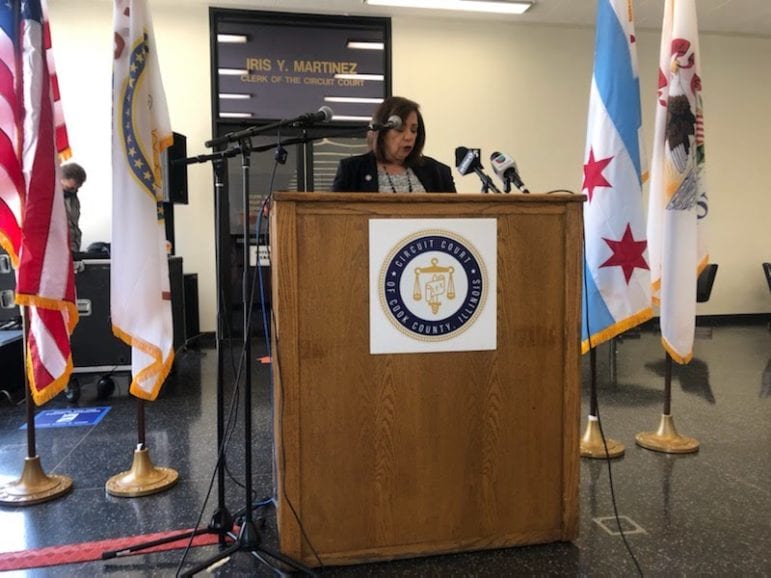 Alex Nitkin for The Daily Line

Cook County Circuit Court Clerk Iris Martinez has walked back a campaign pledge to give the public more access to records from her office under the state’s Freedom of Information Act.

The clerk is the official record keeper for the Circuit Court and is responsible for collecting and distributing tens of millions of dollars in court fines and fees. But the agency is not subject to the state’s open record laws. That exclusion means the public has largely been kept in the dark about the operations and funding of one of the largest unified court systems in the country.

I think your attorney harassing Dean Sallas with a subpoena is not only
outrageous but an embarrassment to the entire legal profession. Dean at 84 is
not and never has been an attorney and his dealings with x, y, and z are NONE OF
THE IARDC’S business.
The over-reach by your IARDC attorney cannot be swept under the rug as it is so
beyond propriety it should be a termination offense! In fact her total
disregard for the CONSTITUTIONAL PROTECTIONS of citizen DEAN SALLAS should
result in termination of her LAW LICENSE. iNDIVIDUALS in the public sector
who so blatantly thread on the Constitution cannot be allowed public license.
Respect for the RULE OF LAW and the Constitution are not to be taken lightly.
Please let me make an observation – Ms. O did forward a letter she apparently
received from Attorney Elizabeth Casanova. This letter was similarly grossly
inappropriate…

DETROIT (AP) – The Michigan Supreme Court unanimously overturned the decisions of a Kalamazoo-area judge who terminated the parental rights of a poor couple after their two children had missed 25% of school.

While the absences in 2017-18 were higher than the school’s average, there was no evidence of resulting harm or neglect, thecourt saidFriday, a key threshold when a judge decides whether to take jurisdiction over children.

The case was closely watched by advocates for poor families, especially during a pandemic when education has been significantly disrupted.

“In 2017, over 230,000 children were chronically absent,” Tim Pinto, an attorney for the father, said during arguments in March. “I’m positive that those stats are much worse today.”ADVERTISEMENThttps://0a667e7f654a162c79b85f21ab0f25c9.safeframe.googlesyndication.com/safeframe/1-0-38/html/container.html