with the internet now, there are no more secrets for public officials, and investigative reports find a gold mine of informatio on corruption:

DID FAMILY COURT JUDGE COMMIT PERJURY BY FAILING TO DISCLOSE $2.5 MILLION OF LOANS IN DEFAULT? 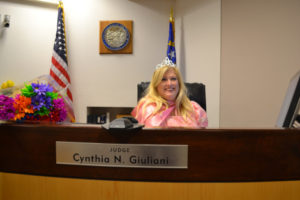 Less than a year after taking the bench on January 5, 2009, Judge Giuliani and her husband, local Attorney Roger A. Giuliani, filed a Chapter 7 Bankruptcy petition on December 31, 2009, in Federal Court. According to their bankruptcy filing, the couple owed $2,579,954.65 on real estate holds worth $1,980,500.00. Their real estate holdings took a major hit when the market crashed in 2008. Most, if not all, of the properties, had loans which exceed the values by…